Today, Pit People officially released on Steam and Xbox One! In just a little over a year, we were able to kiss early access goodbye thanks to the help of our Early Access & Game Preview supporters!

Pit People’s full release will include:

For those of you who have been playing since Early Access, you can check out the full changelist below.

We’re currently working on another update for the future, but when that comes out and what will be included will be finalized later, after analyzing release feedback. (For science!) 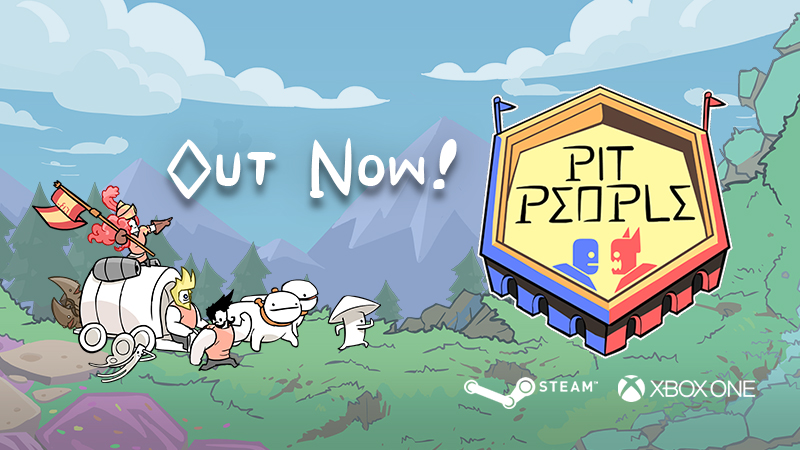 We’ve also got a couple events going on next Week:

Just days after the full release launch, we’ll be holding a reddit AMA at the IAmA subreddit. Come ask us anything about Pit People or any of our games. Bring us your words!

We’ll be playing Pit People and talking in depth about its development. You can watch and chat during the live stream at one of our channels: Twitch, YouTube, Facebook.

It’ll be another chance to chat with our team about Pit People and what we’ve changed since early access. Speaking of which…

For early access players, the full release is also known as Update 6. The changelist below covers all of the improvements and additions since Update 5 and the Update 5a hotfix.

*Spoiler Alert*
Some listed changes may include info from quests that newer players haven’t experienced yet. Read at your own discretion!

-Added new “DianeHealed” entity to swap out with “Diane” entity once she’s
Healed.

rather than a standard alert sound when they spot you. Elite NPCs play original enemy alert sound.

based on the first player’s Yosef hair selection from the arena tutorial.

Fights in general are anywhere from 1% to 9% more difficult than before.