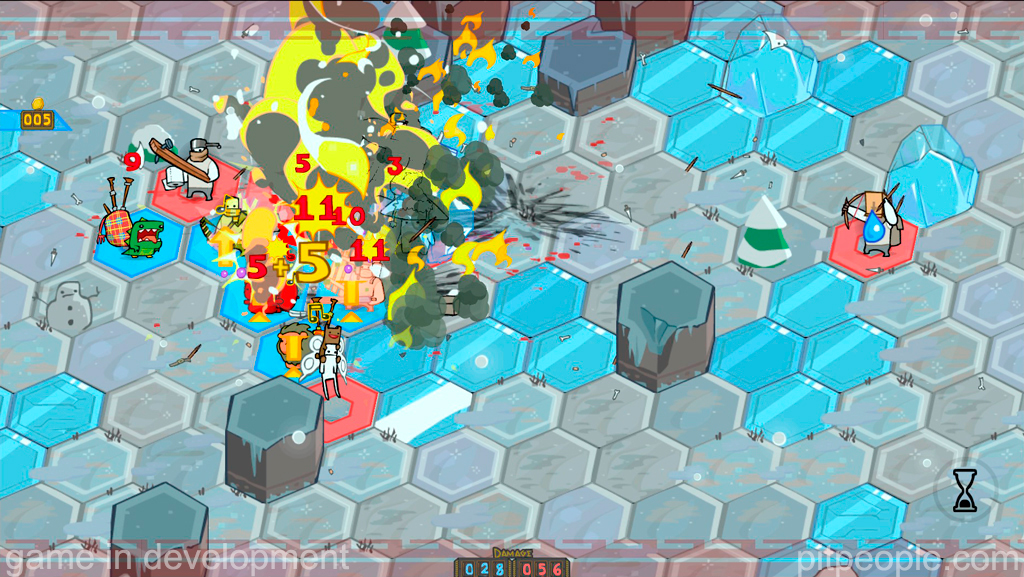 Every great team needs a mascot to pump up the troops. Learn how our Pit People Mascots do more than inspire emotionally as we highlight them in this month’s character spotlight!

Every Mascot inspires the teammates around them. LOOK AT THEM PUMPING YOU UP! They boost morale as well as increasing health, increasing defense, and increasing accuracy. As long as a fighter on your team is standing next to your Mascot, then those fighters will get all of those boosts!

Here’s an example of a long range archer using his NRG-B0 on the enemy team. You’ll notice the enemy fighter blocks one hit and takes the other, while most of the other shots miss the target entirely. The more sweat drops you see over the archer, the more missed shots there were. This guy is sweating buckets!!!

An archer inspired by a Mascot hits his or her shots harder and more accurately. You can see this lizard fulfilling the mascot role perfectly!

Mascots are generally slower fighters so they can only move two hexes unless selected as the Hero. Hero Mascots will inspire teammates even more and be able to walk up to three spaces in a single turn.

On top of inspiring their fellow team members, Mascots can also attack by pecking any enemies standing next to them. Be careful though! They’re vulnerable to electricity and poison, so you’ll want to avoid Robots, Mushrooms, or weapons that use those elements.

When a Mascot is close to the death, as a final hurrah this fighter explodes, harming those around them. The Mascot might take others with itself, too!

That’s where the ongoing strategy comes in: you’ve got to leave friendlies next to your Mascots if you want them to get that glorious boost. Yes… THAT Mascot. The exploding one. So, that will mean keeping your eyes peeled to defend its position.

…and when that Mascot is getting low on health? It’s time to let that Mascot go! Watch that mighty Mascot blow — thrashing enemies to and fro! Mascot, Mascot, GO, GO, GO!!!

Just like any other accessory in Pit People, these Mascot specific items could pop up for purchase in the Market (if you already have a Mascot in your team), they could be potentially acquired through loot & rewards, or you could always Recruit a Mascot in battle if they have the desired instrument or costume on their being. Mix and match instruments and costumes as you wish!

-Mascots boost health, defense, and accuracy in teammates standing next to them
-They can attack close range by pecking at enemies
-Mascots are vulnerable to electricity and poison
-At its final moments of life, the Mascots explode and injure anything around them