November 21, 2015 is Alien Hominid’s 11th console birthday! Eleven years ago, we released Alien Hominid on PlayStation 2 after forming our company in 2003. In honor of this special occasion, we’re bringing back one of the original Alien Hominid characters: Fat Kid! 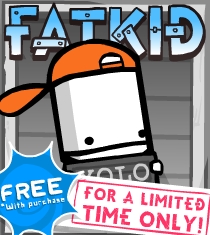 Along with the celebration of Alien Hominid’s birthday, we also celebrate our “final” new Arena Feature in BattleBlock Theater. As we announced earlier this month, we’re going to be putting majority of our resources into Pit People after November so we’re going to be repeating previously featured playlists in BattleBlock Theater. This is the “final” new Arena playlist to be added into the rotation.

XBLA Arena Feature:
winner 1 By justmalice
UPDATE: All good! up and running!

Keep in mind that we’re merely discontinuing our weekly searches, but we’ll still be checking for new playlists from time to time so it’s not final final! We encourage everyone to continue creating levels and uploading them to the Community Theater 🙂