You’ve heard his voice in BattleBlock Theater, heard his songs in Castle Crashers, read about the Whisper Room and now it’s time to learn more about the elusive Will Stamper.

Today, three Behemoth staff who worked closely with Will write about their experiences collaborating with the voice actor when creating story lines and in game quips for BattleBlock Theater. We’re calling these personal stories “Will Stamper n’ Me.” 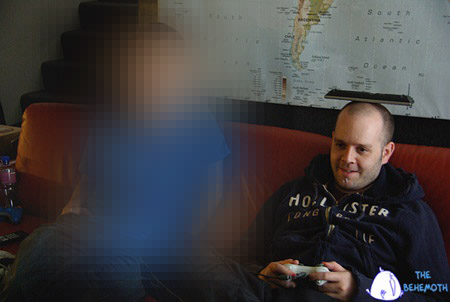 Dan Paladin (in his witness protection form) and Will Stamper (right)

I had moved to Philadelphia at one point during production of our first game, Alien Hominid.  I ended up being roommates with Will Stamper.  We’d have all kinds of dumb inside jokes and play Burnout Takedown together, screaming like oldtime gangsters while drifting around each other and exploding.  I became familiar with Will’s work and I’ve always had a certain respect for its quality.  He does sound, animation, art, music, writing, awesome interfaces, etc etc..  All of his work has a lot of polish.  I’ve never seen him turn something in that was half-baked.

We asked for Will’s help during Castle Crashers and he ended up helping a ton.  He redid the in-game HUD, the voices for the Ice King and the Industrial Prince, the barbarian war music, a bunch of sound effects and lots of processing to keep the sound levels from capping out.  It was much more work than one person should really have to do but he went and helped out without any complaint.

At one point or another when we were working on BattleBlock Theater I knew we could use his help again.  We had decided to have our cinematics be puppet shows (read more on cinematic development here), and who better to narrate them than my old roomie and friend?  I asked him for a test run of the first cinematic, and he nailed it.  We ended up just using his test run as a final piece of work (which was later redone due to story rewrites, but you can see it HERE).  Every time we got more lines and jokes from him they’d crack us up to the point of tears. He breathed a ton of life into the project and enhanced the atmosphere we had hoped for far beyond anything we could have expected.  During your journey in the game, he’ll jab at you and then a few moments later take the edge right off what he just applied.  We’re all very happy with his contributions and we recognize and respect the immense quality. 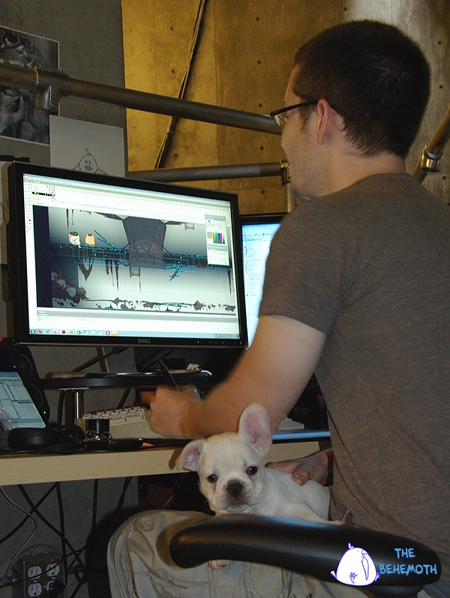 Dan working on the Hatty capture cinematic. (The late Admiral is also pictured)

Working with Will is a fairly simple thing.  All I have to do is give him a quick rundown of what we’re going for and maybe a couple overarching points we have to cover and that’s it.  I just go back to my desk to draw and I know sooner or later it will be like opening presents at Christmas when we get the next batch of sounds.  Due to memory restrictions we were unable to use all of the audio we received.  I’d say there’s roughly 2X more dialogue that we had on hand than what is in the final game.  To put just how much work that is in perspective? There’s easily over an hour of recorded lines in BattleBlock Theater.


Thanks Mister Stamper.  I salute you!

When I first heard Will Stamper’s narration for BattleBlock Theater I had no idea that I’d be the one to later animate the cutscenes. Once I was tasked with the job I knew that I had my work cut out for me if I wanted to live up to the humor in each chapter. Once I got started, it was very easy to let the voiceover inspire the animation because of how up and down his tone would be combined with the bevy of personality types (Myah, SEE???). I’ve listened to his narration so many times but even now I still pick up on jokes I didn’t catch the first time because the game is so dense and full of humor.

Something people might not realize is that he created all the sound effects for the cutscenes too! We didn’t add anything to the audio track that he didn’t provide. The sound effects helped the visuals a great deal especially in parts like the story of Purrham Furbottom. There’s a lot of great subtle background noise that provided the mood which would then influence how I animated or lit the cutscenes. All of this allowed me to get into the head of this crazy narrator to the point where if I hit a creative block I would ask myself “Okay, how would he use his stick figures here?” 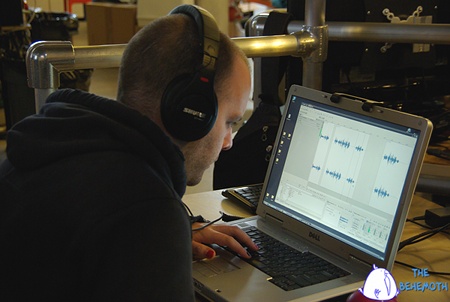 Will working on editing his sound clips for BBT.

I also worked with him on the release date trailer, launch trailer and story trailer. For the release date trailer it worked very much like the cutscenes where we gave him a basic premise and he ended up going further with it than we had even imagined. For the launch trailer I gave him a cut with no sound effects or narration and he sent me back a BattleBlock Theater SONG. I was not expecting that at all and what I thought was kind of an okay cut turned into something amazing. For the story trailer I sent him a version with my terrible scratch narration and he took my angle and made it a lot more interesting. Asking him to collaborate on anything you’re doing is pretty much like adding chocolate, you just can’t go wrong. Well, unless you’re talking about something that’s not a dessert, not sure how well that would go.

The original opening cinematic can be considered the first Will Stamper Narrator “prototype”.  With that cinematic he created the first incarnation of the Narrator character and pretty much changed the course of our lives from that moment on.  As for the story leading up to that initial collaboration, you’ll have to refer to Dan’s segment above, but I guess this is where mine starts.

After that initial cinematic was created, the narration focus quickly shifted to in-game quips.  This was a Dan idea that originally started with the pre-level stick puppet animations and then quickly found its way into gameplay. The Narrator became this omni-present entity that was always right there with you and constantly commenting.  This of course opened the door for more contextual audio from Will.  Receiving a new batch of audio quips was always like xmas.  Often these audio drops could be anywhere from 50 to 100+ per category.  Fun fact: What’s in the game is only about 50%-ish of what he actually outputted.  I think it goes without saying that the culling sessions to whittle these down were always a ridiculously fun time.

With every quip I usually had to do some light editing and exporting, so I’ve listened to every quip in the game… let’s just say a lot of times. (FYI, you can download some of the quips in our free ringtone pack.) It’s interesting because if you know the chronological order of the creation of the quips you can actually hear the Narrator voice evolve over time.  If you A/B, say the original cinematic with the final versions, you’ll definitely hear the opposite ends of the spectrum.  The slight difference in tone, inflection, and delivery. But it’s through the quips that you can hear the subtle gradation of the character.  In the end, he didn’t just create a character and went with it, but refined and evolved an already hilariously unique persona over time. Needless to say I count myself lucky to have had a front row seat. 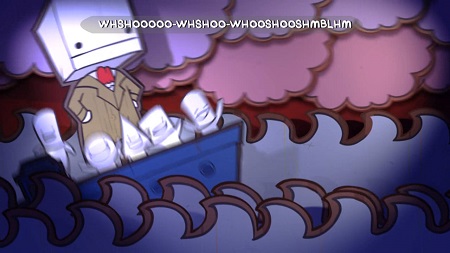 Another close up look at his work was definitely the creation of the subtitles. Do people know there are subtitles for all the cinematics? I still remember subtitling the very first cinematic specifically to test out our subtitling system. Little did I know this would be my first taste of what I like to refer to as: transcribing the diary of a mad man.  With subtitling you have to break up the entire dialogue into phrases based on the timing of the vocal delivery. So again, I became very intimate with every single word spoken in the cinematics. (Though I’m sure Derek can give me a run for my money.)  One of the most enjoyable aspects of this process was not only getting words like “peeslosh” translated, but dealing with the onomatopoeia. I suppose there’s a fundamental choice whether to omit something like “WHSHOOOOO-WHSHOO-WHOOSHOOSHMBLHM”, but really, where would the fun be in that? 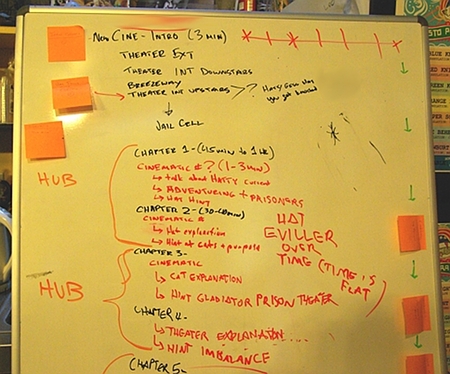 With regard to the story as as a whole, it was one random afternoon that Will, Dan, Emil and myself sat down and decided to outline the remainder of the story.  We always had a story synopsis with key events, but we were still missing a couple in between spots here and there.  We cleaned off a whiteboard and in one afternoon mapped out the framework for what would be the eventual 9 cinematics plus 2 in game cinematics.  It’s important to note here that there was never a script, no hired “game writer” per se for BattleBlock Theater.  The story was an outline, given to Will, and then all dialogue was either written or improvised by him. Now that the game is released I talk about this portion of development a lot more with friends.  When I explain this process everybody is in awe of his total contribution to the game.  From the character and dialogue to Buckle Your Pants to a slew of sound effects, Will Stamper is truly a tour de force.