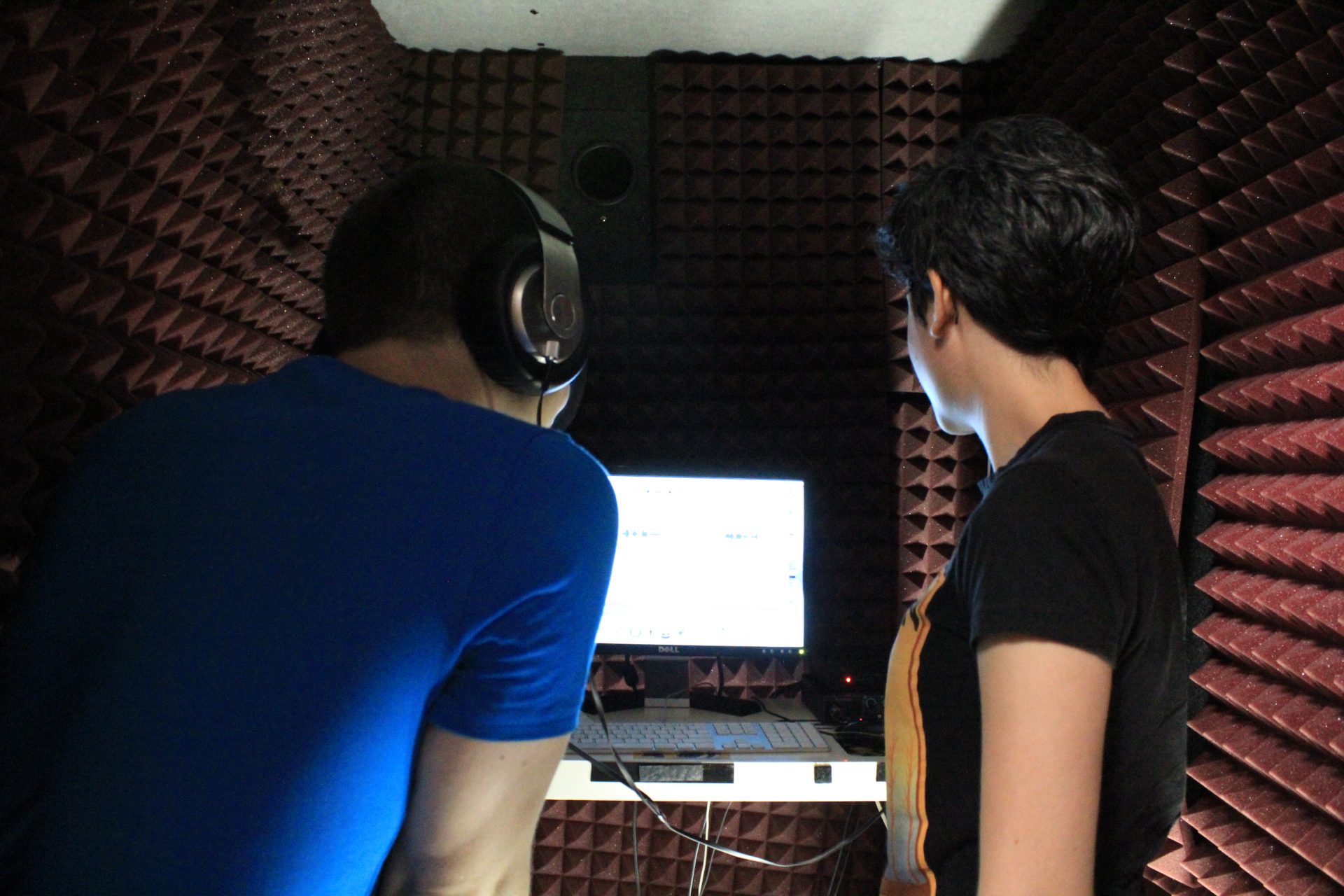 Dan and Ashly during a recording session in the Whisper Room

The idea of a voice actor cast is both humorous and daunting within the context of The Behemoth and the breadth of games we’ve worked on. At one point it’s non-existent, at another very minimal, and then eventually it became the most amazing narration, to me at least, I had ever encountered. It’s safe to say Will Stamper’s BattleBlock Theater (BBT) narration is something special on multiple levels. From the writing to the humor and to even the tears. To watch this finely tuned levity weave its way throughout the game with surgical precision, it would be hard to think it was, well, a layer that came much later in the development process.

With Pit People, the process drastically differed from that of BBT in many ways. The gameplay, the story, the voices, the look; everything was started more or less in tandem. There are probably a bunch of interviews of me talking about Dan Paladin’s sketchbook containing these teams with minimal UI. I’ll be clear, that came first, but what followed was not only quick, and to put simply with a term easily overused within these walls… organic.

While the game was in its prototype infancy, Dan and Will were immediately hatching their plans for the gibberish speak of this legion of adorably wonderful little fighters. I remember Will sending me the first test batch of assets which were actually the Mushrooms. Imagine the entire world of Pit People speaking in the mushroomed fart voice! Because that was our life for a few months while the other voices came online. It was funny, endearing, and most importantly: proof of concept. But it wasn’t until the human voices dropped where we, as an office, could not get enough of listening to the game… well, speak.

Much like fighters, favored spoken lines emerged and with it another deeper connection to the game and its characters. At the time, ideas like hiring a linguist, constructing a true language loosely came up, but easily dismissed. As cool and interesting as something like that would be, it’s not really in the spirit of the game or the company. When working with the characterization, having structure like that would be too restrictive and ultimately limit what you can do. Instead, randomness prevailed and with it the room to flexibly create characters with subtle catch phrases and gibberish that reflect who they are rather than “how” they are–if that makes sense? Some are more apparent than others, but if you listen closely you’ll hear these audio motifs.

I can’t speak personally about Will’s choir of voices, but I can say this: He’s a tour de force, a beast in the (vocal) booth, and above all, an inspiration. I will leave those stories to maybe a future post or interview and he can regale you with stories of chopping/splicing words to make new ones, mirroring other languages, and screaming until losing his voice. But that’s another story for another mouth… or pen. What I can say though is that we eventually wanted to vary things up and introduce different voices with different timbre and have them exist somewhere else on the sonic spectrum. Enter Ashly Burch [cue triumphant music].

Ashly did two sessions with us; one with Dan and one with myself. Ashly and Dan worked on female voices and some of the main cast while she and I focused on crafting Sofia and some pick up lines. Ashly improv’d about 50% of her lines–which was awesome.

We write some lines out phonetically, there are sometimes some goto syllables, and have the catch phrases, but mostly we have lines in English of what we want to come across with the correct intonation and assonance. So actors would say the line in English, to know what they were conveying or emulating, and then do the line in gibberish.

In the end, everybody put their own twist on things and I’m sure there are many more processes that I’m not mentioning, have forgotten or probably not aware of. Much of what we do is a collaborative process and creating a character voice is no different. From Monica Franco and Piper Faye working remotely on their respective characters, to late night, in the moment character ideas with Dan and myself (doing the voices), there are so many tender moments and stories in between. My only regret is that we don’t have it all on video… but we do have audio outtakes 😉

We’ll be talking more about the VO cast over the next few weeks, sharing more stories, and more importantly adding even more voices and characters into the game.

A bit of a prequel to the last gameplay post. Dan

Behold, the Bounder! We go over this new enemy in

Hey PS4/5 friends, looks like we're keeping the an

But wait there's more! the Behemoth loves our four