The Pit People closed betas have come and gone, but we’re still processing all of the wonderfully helpful feedback we got from all of the beta testers! In case you missed it, the first thing we did was pull some of the stats from both betas and combined some of the most interesting ones into an infographic. We’re continuing development based on a lot of feedback and once we have an update for the game, we’ll post here. 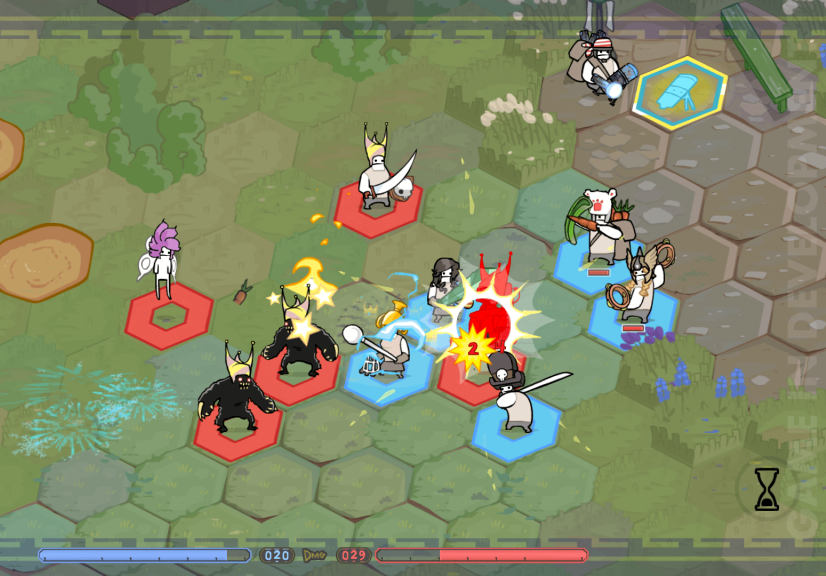 Until then, we’ve got another unique Pit People fighter post! For the first time in Pit People blog history, we aren’t looking at strange creatures; This time we’re focusing on the most cornerstone fighter of them all. The human!

(Just in case anyone is wondering, no, we have not covered all of the creature types in Pit People just yet! More to come..)

Let’s break down a little bit of that and make it digestible.

First thing’s first — in Pit People, everyone aims for their enemy’s head when striking. That being said, if humans wear a helmet they’re now clad in armor! While helmets are great against many attacks they’re particularly strong against medium sword attacks (which happen to otherwise be reliable on damage).

This is where mallets come in. Mallets are the anti-armor choice of Pit People.

Fighter types that have the ability to don a helmet (As of October 2016):

FUN FACT: Wearing armor on your head allows you to somehow walk through spikes or fire while taking less damage. Videogame logic, but what-ev.

Hmm. If helmets have that big weakness to mallets, then why not just bring fighters without helmets? Well, heavy swords would be just one of those reasons. Behold as the heavy sword does the most damage in one turn against an unarmored defender, while the medium sword achieves a sizeable hit as well!

Heavy sword against an enemy w/o a helmet

Medium sword against an enemy w/o a helmet

That’s right! If you’ve got a sword, be sure to go for enemies who didn’t bring any armor to the fight! This gentleman brought a top hat to a Pit fight which won’t save him at all defensively speaking.

However, keep in mind that the more effective an item is overall, the heavier it is– and weight can affect your stats. There are tough choices for humans to make. A heavy sword is great on damage, but limits most other choices for defense/utility items to couple with it. The medium sword allows for more. And then….we have the light sword as well!

Light sword against an enemy w/o a helmet

The light sword does the least damage per swing, but it has the unique ability to allow two swings within one turn! If you place your fighter between two enemies it has a chance of swinging twice at one enemy or once each at two enemies in that same turn. Light swords come with the passive benefit of boosting your dodge chance and weighs almost nothing. 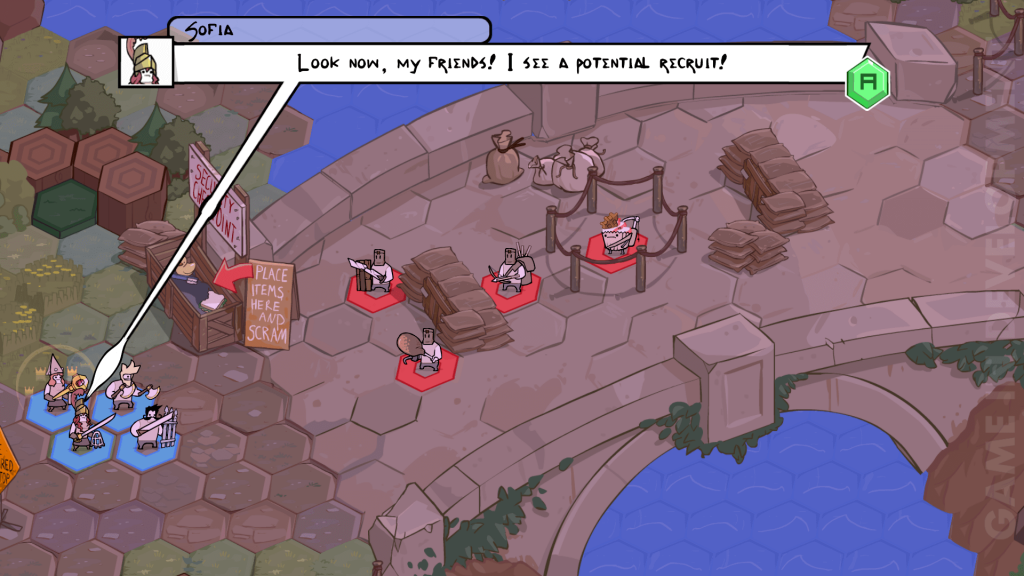 Anyone familiar with Sofia knows she starts with a medium helmet along with her light sword. She’s either dodging or mitigating damage with her armor. She’s also got the ability to snare people from range with her offhand “recruiter” net. Defensively speaking, she’s rather prepared overall.

Fighter types that have the ability to wield a sword (As of October 2016): 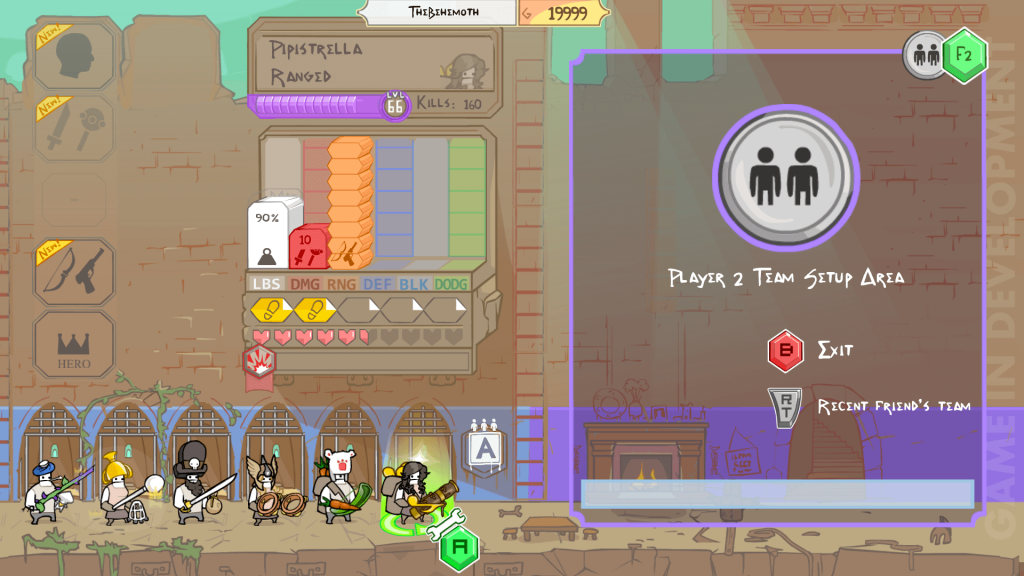 Note: Humans that are equipped with a ranged weapon (barring the offhand thrown objects like rocks or nets) are unable to wield a main-hand or offhand item at the same time. 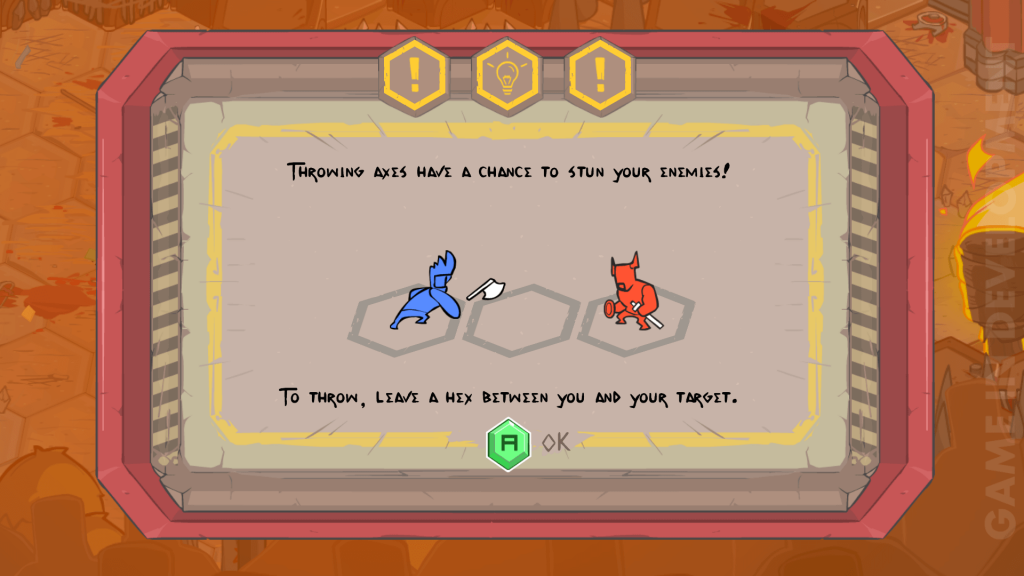 From the introduction chapter you’ll learn that ranged weapons strike when not within melee range (and are still within their striking range). Throwing axes have a much higher chance of stunning when thrown, but still allow for melee.

Ranged weapon characters only allow for helmet options in terms of additional gear but compensating with heavier armor means less potential damage a fighter can deal. Ranged fighters also prefer not being snuck up on, because they need some space. Try to defend your ranged characters with positioning or terrain layout rather than armor if you’re trying to get the most damage you can out of them. 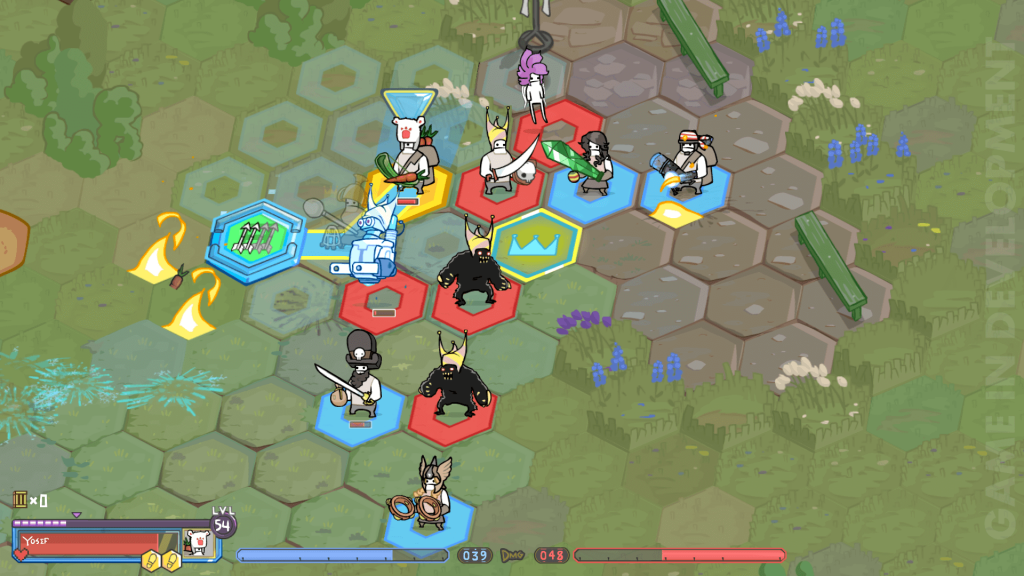 All archers can move at least two hexes in each turn, unless stunned/slowed/snared, but moving an archer will affect the number of arrows that can be shot on that turn.

Laser weapons are the least accurate of all elements.

You win some, you lose some. The sweat drops indicate when the fighter has missed a shot. Laser weapons are the least accurate of all elements. It’s so off sometimes that even that poor Mascot can’t save every miss!

Generally, using this smaller bow will allow fighters to wear any type of headgear. However, if a light bow with special abilities is selected, such as the ability to freeze targets, then the bow weighs more. In this case, wearing a heavy helmet along with the special bow will result in very little damage dealt due to the dangerously heavy weight on the fighter.

Light bows tend to fire a larger number of shots from a longer range with the tradeoff of less accuracy and less damage per shot. Wearing a heavy helmet on a light bowman won’t affect their damage too much (this is because damage encumbrance is calculated on a per-shot basis).

A bow of this weight will do a decent amount of damage from a shorter range than the light bow, but it will also fire less projectiles. We don’t recommend wearing very heavy helmets on these guys as the damage they deal can be substantially impaired when doing so.

These are super-long ranged-weapons that still fall under the archer fighter type. Harpoons generally have fewer shots than bow & arrows, but they do some heavy single target damage.

While the Harpoon is built for single targets, the Mortars come with an area of effect — the type of AoE can range from general explosives to electricity to fire to ice. With any explosion, there’ll always be a chance for some friendly fire if you’re targeting closely to one of your own fighters. During your planning phase, all AoE in Pit People will be indicated by a small warning on any hexes where this may occur.

Both the Harpoon and the Mortar greatly pressure enemies to move up closer. Once enemies are fairly close, the Harpoon/Mortar users must back up to be within firing range again.

Now that you know about many of the weapon/headgear combinations you could make with your team, what what do you think suits your own personal preferences on strategy?

Are humans going to be most of your army, or are humans merely going to compliment your stable of strange creatures?