We’ve recently announced Castle Crashers Remastered in all its glory! I wanted to take this time to talk about why we decided to do this and what it means to us.

About a year ago we started thinking about the future. Castle Crashers would disappear along with lots of other games once the “Last Gen” would wave goodbye. We’d all move onto our new consoles and Castle Crashers would be stuck there on the old ones. We didn’t really like the idea of the game no longer being available to you guys or any newcomers. Millions of people have enjoyed the game and written into us with such amazing experiences, it seemed like it’d be a loss to just let it vanish for any new or returning console players.


We chose to bring Castle Crashers Remastered to the Xbox One seeing as Castle Crashers’ original home was on the Xbox 360, having more than 4 million happy players! And for you PC gamers who might be curious, Castle Crashers on Steam will in fact receive these same updates to the game in the future!!!


This is a game that means a lot to us. It was a very defining moment for us as a company. Your continued support has brought us all the way to this point, which is almost EIGHT YEARS after its release! Seriously, THANK YOU!


So instead of simply porting it we felt like we should update it and make improvements. Math time!!!! The original Castle Crashers shows 407,040 pixels at any given moment at 30 frames per second. Castle Crashers Remastered is displaying 2,073,600 pixels at any given moment all while 60 frames per second. That’s 5.094 times more pixels shown at double the framerate! For anyone wanting to see a visual of what that means for the size and clarity of the resolution, please see this: 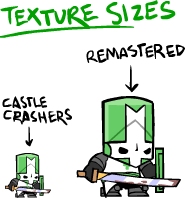 The game seriously feels better due to its buttery smoothness in all its double frame rate speeds all while and it looks nicer with much larger textures. But we didn’t just end there! 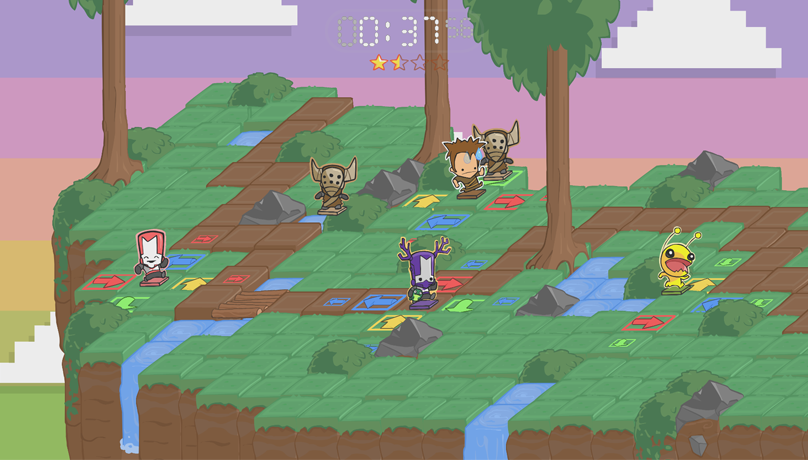 One of the things that haunted me about the older version was a minigame called All You Can Quaff. It consisted of lots of fast and furious button mashing. Some people love it, but I just felt like it wasn’t the best we could do. So we made the call to replace it with something we’re confident would be much more fun for most people. It’s called Back Off Barbarian, and it’s a mini game where you and your friends run from Barbarians (or other baddies!) in frantic survival. You can revive each other if you find the potions on the board, but once everyone is gone it tallies your time up. Some players love to see if they can beat their old time while others just go back for the “potato chip” style gameplay. Just one more! Just one more! It’s good stuff, that I can promise. Here’s a quick Vine to show you what it looks like:

In addition to a new mini game, we’ve made some characters available from the start. The Pink Knight seems to be so iconic to you guys out there that we decided to unlock the Pink Knight by default so you can use this character right away in the story, arena, or the mini game.

We’ve also changed how the multiplayer menus work, which seems a little minor but can be pretty big in practice. With improved networking, everything involved with playing along with friends online (or with strangers!) has improved the experience significantly.

To summarize, for the past year, we’ve been updating Castle Crashers to perform and look a lot better in Castle Crashers Remastered. We’ve got a new minigame, and a lot of little tweaks in the corners. Maybe that’s not exciting for someone if they’ve played through it all. And hey, that’s totally fine. I understand that! For anyone who might be looking for something new, we’ve got Pit People brewing, and man am I proud of that thing.

We’ll be announcing more details as upcoming tradeshows roll around. You’ll probably hear things about prices, release dates and all that other stuff.

While we are at it, we figured why not do ANOTHER

It's Autumn...the air is chilling, leaves are fall

Wondering about new AHI updates? Have an insatiabl