*Spoiler Alert* Video and blog post reveals a huge chunk of the story from Game 4.


You might have first seen our blueberry farmer at PAX Prime 2014 when he was first flung into the chaos we’ve code named “Game 4.” We’ve put together a video of the first 20 minutes of said chaos in case you missed it, or just want to see some of the changes since then. (This video footage shows Game 4 gameplay as of May 2015.)

If you’re interested in anything that got reworked, you can hit the jump and see some comparison images!

The changes we’ve made since the start of development came organically at times. Or, changes came out of necessity depending on the feedback we got from players in usability lab or PAX. Even before the debut at PAX Prime ‘14, we went through several iterations until a quest or the story felt right. This happened with the art, the dialogue, the level design, the music, etc.

There’s so much we could tell you but, for this blog post, we’ll focus on the opening fight scene with Horatio. In the images below, the ones on the left are from earlier builds of the game and the one to the right of it shows the progress of change. Okay, now that we’ve got that out of the way… storytime!

Oh look. It’s Horatio. He started in the Arena in our first prototype. Then we made him a farmer! Seasoned killer, or blueberry cultivator? We went with making him a farmer and sketched out a possible scenario for you, the player, to find him in the midst of.

Horatio was just any old farmer at first. Once we got the dialogue from Will Stamper, our narrator, we heard him call Horatio out as “a blueberry farmer.” This resonated with us so we added blueberries to his farm! After a while the blueberries just didn’t feel fantastical enough. They were kind of grossly dehydrated and made me feel strange. So we went back over them and made them way more plump and juicy! OKAY! I like how they taste now!!!!!

The wheat was also made juicy. But the taste remained just as flavorless. Horatio got a new tractor as well, somehow, because bigger blueberries and wheat call for bigger tractors!

Horatio’s son, Hansel, was put into the window of the house to help push the urgency of defending him. The team bands got thicker for more quick visual clarity, so now you can see clearly who Horatio is fighting — blue versus red. Now I can see it even better!!!! Wowwww!!!!!!!

You can also see a bit of the UI (user interface) changes. The A button prompt was added so you can control the speed of the dialogue, and the speech bubble now animates a ripple out from the character to make it even more clear who is doing the talking. 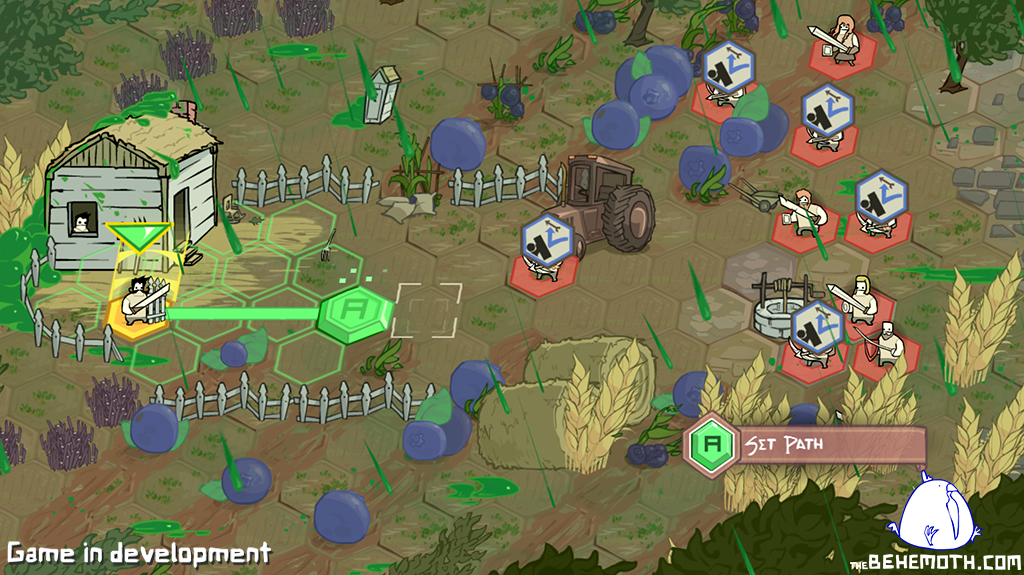 Finally, let’s take a last look at Horatio’s first fight from the latest build of the game. As you can see above, we’ve added in shield icons so players can tell who Horatio’s shield will deflect in the opponent’s next turn. The path line has changed from a dotted line to a solid line (see Figure 1) so that it’s quicker to plan. And last but not least, we’ve changed up Horatio’s shield to a fence!

What other changes can you spot from the latest Game 4 video compared to our PAX Prime demo video? Leave us your comments below!