Today, we are releasing two DLC packs for Castle Crashers on PlayStation Network in America and Canada. PSN users in these regions can now download the Can’t Stop Crying Pack and The Legend of the Blacksmith Pack for $1.99 for each content pack. Castle Crashers fans on PSN can now play with the Hatty Hattington character from BattleBlock Theater and the Blacksmith, a.k.a. Purple Knight.

You may recognize the Can’t Stop Crying Pack from when it was first released on Xbox LIVE with BattleBlock Theater. Please keep in mind that on Xbox the DLC is unlocked if you have both Castle Crashers and BattleBlock Theater, but on PSN the DLC is priced at $1.99 USD because BBT is not available on PSN.

Pink Knight, Can’t Stop Crying Pack, The Legend of the Blacksmith Pack will release in Brazil.

Now our fans in PSN Latin America can get their lollipops and rainbows on! 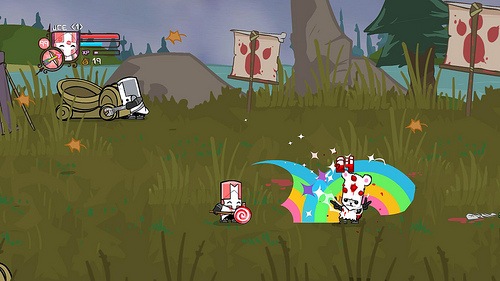 FROM AGENT A: NOTES ON HOMINID MOVEMENT If an Ali

The snow is melting (not really, I’m freezing) a

Festivities are fun, but they can’t last forever

The fun is only beginning with the NOE Festive Off