Derek has taken some time to share his involvement in the process for the in game cutscenes in BattleBlock Theater (BBT) and his collaboration with Dan & Will, from concept to final product. Read on! 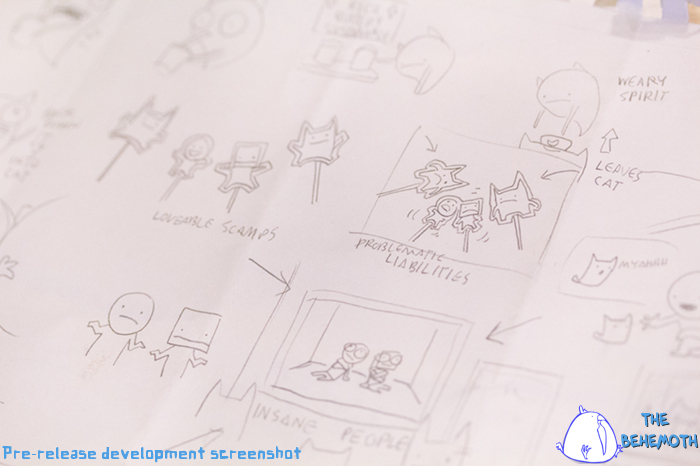 Chapter 7 – Story board by Dan Paladin

Hi there! This is Derek Lieu the cutscene animator for BattleBlock Theater here to talk about, well, cutscenes!

In 2011, The Behemoth released their first opening and prologue cinematics for BattleBlock Theater with art and animation by Dan Paladin using Flash and narrated by Will Stamper (video below). Later, the story was reworked and new narration was written/recorded to clarify the plight of Hatty Hattington, the friends, the history of the hat and BattleBlock Theater itself.


In 2012, Dan saw my use of After Effects for one version of the Necromancer Kickstarter video I worked on so he asked me to make an animation test because he felt BBT’s cutscenes should be animated in After Effects. After seeing the test, the development team felt that using this software would work well with the game’s look and would be very efficient, so I was offered the job to animate all nine of the game’s cutscenes, which I gladly accepted!

There were many benefits to animating the cutscenes in After Effects instead of Flash. Several features such as 3D layering, lighting and shadows could help enhance the mood and make the puppet scenes look more realistic. Also particle systems and physics plugins helped create even more effects to bring life to the crazy story of BBT.

Before production started on animation, Dan and Will Stamper came up with the story beats for each cutscene. After the narration was recorded, it was handed off to Dan who planned out the visuals for each cutscene. For the opening cutscene, Dan made a rough animatic to give me an idea of what he wanted, so it was my job to recreate and/or refine his animation in After Effects. Each cutscene started with his rough sketches which I would use to animate and then swap out later with the final pieces with full details and colors. 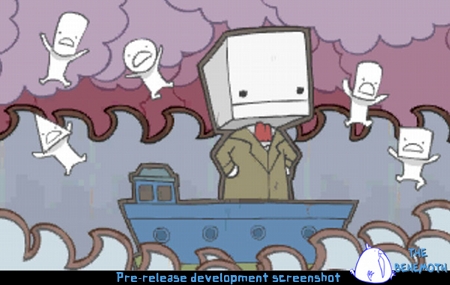 Dan’s rough animatic made in Flash

The parts that weren’t in the animatic, Dan either described to me or left up to my own judgment for what I thought would be funny. I used the original cutscene as a cheat sheet as much as I could, but otherwise tried ideas and hoped Dan would approve of them. Fortunately throughout the entire process Dan usually liked what I did and if he ever had a major criticism it was usually about something that I wasn’t completely satisfied with anyway.

The final product that shipped with the game.

Most of the animation was done using the motion sketch tool for the puppets’ motions and manual keyframing for the rotation. The motion sketch tools lets you literally sketch out the motion you want either with your mouse or tablet. So this was perfect for creating the natural movement the game’s narrator would be using if he had actual stick figure puppets. After the boat animation was done, the friends were “attached” to the boat and the physics engine plugin Newton was used to animate the friends. 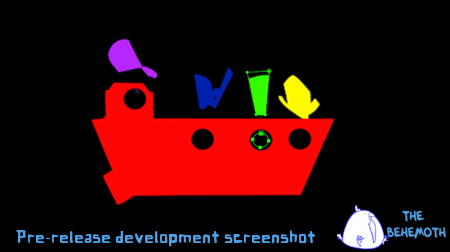 Here are the basic shapes for the friends in BBT, attached to the boat via ball and socket masks which will get interpreted by Newton.

The way Newton works is that you link objects by creating masks that resemble ball and socket joints for each element you want to simulate. Then in the plugin you assign the pieces behaviors based on how you want them to react (e.g. do you want a piece to react dynamically to the movement of other layers? Do you want it to interpret existing keyframe animation and then use physics for non-keyframed areas?). 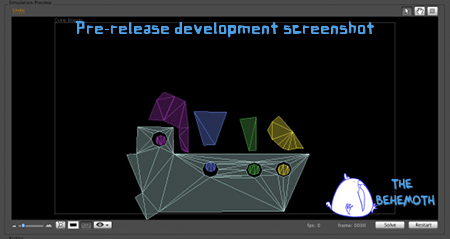 Here you can see how the plugin translates the masks into objects which will then be used for the physics simulation.

Since the release of BBT, Newton 2 has come out which has a full joint system that eliminates the need for this cumbersome technique. Though the side benefit to this joint technique was that sometimes characters would jostle free and fall out which actually provided unintentionally hilarious results when the friends would fall out of the boat. Sometimes I would keep the “mistakes” because they were so funny and worked for the cutscene.

Newton generates HUNDREDS of keyframes based off the physics simulation.

What Newton allowed me to do was only animate the boat and have the friends react to the motion dynamically with convincing physics. To make anything that looked even close to this sort of simulation using only keyframe animation would’ve been laborious to say the least. As for Hatty, his animation was simply parented to the boat animation with a slight offset so that he didn’t stick rigidly to the boat. 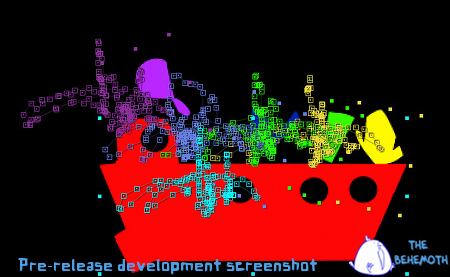 A lot of my comps looked like this, and a lot of the time I had to go in and change parts somewhere in the middle.

I also had to create a rig for Reginald so that his head and hat would flop around, but make sure that everything stayed attached. It took a lot of trial and error, but once it was properly rigged together, all I had to do was animate his body and hope that his floppy head and hat would move about in a way that I liked. 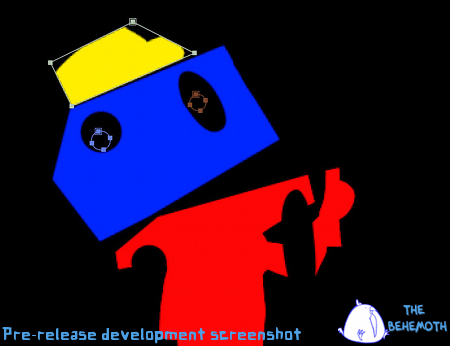 The “balls” for Reginald’s hat have large sockets so that there’s plenty of room for the hat to flop, but still stay attached. Same for the top part of his head.

I also used the particle system plugin Particular by Red Giant when a cutscene called for a lot of objects that would be far too difficult to animate one by one. For example, the “…carelessly sprinkling friend after friend into the deep dark ocean…!” moment. For that section, Dan drew a few friends that I then fed into the particle generator and adjusted the settings to change the direction they fell out of the boat, how much they’d spin, how much gravity there was and the rate that they’d be emitted. During the “HELP US” moment I increased the number of friends being emitted so it would look like the shaking of the boat caused even more friends to be thrown overboard.

The particle generator that became the friends being thrown from the boat. Doesn’t look quite as hectic without the sprites.

After the animation was finished, it came time to really make the cutscene look cool by adding motion blur and lights! First of all, the layers had to be converted to 3D layers and offset in 3D space so that they could cast shadows on objects behind them to really give it depth and make it look more realistic. Then I had to figure out what kind of lighting I wanted for each moment and when to transition. Looking back, I used way way too many lights for some scenes which increased render time dramatically, but I learned a lot just from this first cutscene. You probably can’t tell, but during the candy island part there are maybe six lights or more in that shot alone, even though it probably could’ve been done with three or fewer. 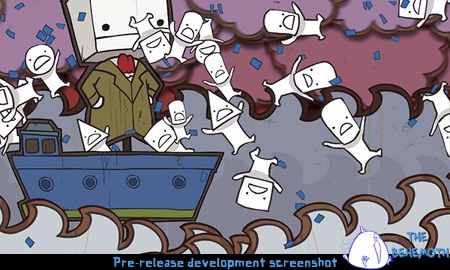 If I had to do it all over again I would’ve worked much more efficiently and maybe it wouldn’t have taken a week to render the whole thing out at best quality (yes, a WEEK!) For example, I’m not sure people will even notice that there’s a light in front of each friend during the stormy scenes which I put in to make it look like they were being illuminated by lights on the boat. Fortunately, with more practice I was able to make the After Effects projects more efficient to the point that each cutscene could usually be rendered overnight. 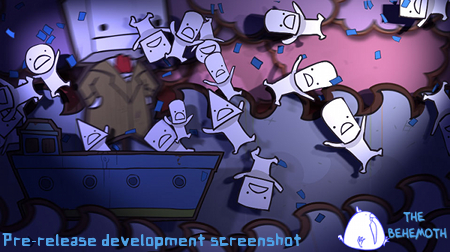 After the first cutscene was out of the way, Dan ended up giving me less direct animation reference and instead would doodle out the beats of each cutscene and talk me through it. Then I was free to interpret his pitch by coming up with my own ideas for how to make the cutscenes really funny. The more I worked with him, the more I learned about certain things he liked so that as we went there were fewer changes to be made. The project was so much fun that if anything in a cutscene bothered me I would constantly go back to tweak and fix things here and there whether it was an animation that felt a bit jittery or just how bright a light was in a particular scene. 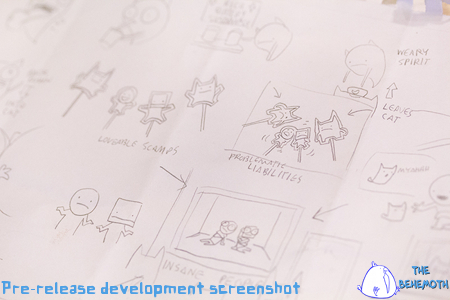 Every cutscene started as just a simple pencil sketch by Dan.


This was by far the most fun I’ve ever had on a project and I’m overjoyed to be a third of the team responsible for creating these cutscenes. Both Will Stamper’s narration and Dan’s artwork were so funny unto themselves that I knew I had to do them justice by making the animation as funny as possible. For me this project was the perfect blend of being just within my technical range of expertise that I knew I could do it, but still challenged me enough that I was constantly learning new techniques to bring the whole thing to life.

Plugins I couldn’t have made these without are Newton by Motion Boutique or Particular and Shine by Red Giant.