What exactly are Saracens you ask ?

The term Saracen comes from Greek Σαρακηνός, which has often been thought to be derived from the Arabic word شرقيين sharqiyyinOED (s.v.) calls etymologies from this “not well founded”. The term spread into Western Europe through the ByzantinesCrusaders. In the early centuries of the Roman Empire, the Saracens were a nomadic Moor tribe from the Sinai Peninsula, but later the Greek-speaking subjects of the Empire applied it to all Arabs. After the rise of Islam, and especially at the time of the Crusades, its usage was extended to refer to all Muslims, including non-Arab Muslims, particularly those in Sicily and southern Italy. (“easterners”), though the and

In Christian writing, the name was made to mean “those empty of Sarah” or “not from Sarah,” as Arabs were, in Biblical genealogies, descended from Hagar and also called the Hagarenes (Ἀγαρηνοί). According to the Arthurian Lancelot-Grail Cycle, the name derives from Sarras, an island important in the Quest for the Holy Grail.

At the end of the day we really don’t have a name for this character, but we keep referring to them as Saracens. So although the historical information may or may not be exact, we just like the pretty colors and shiny weapons. 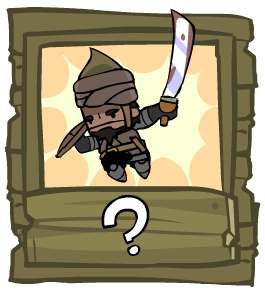 Ditch the Halloween haunting spree for a shopping

Three new employee chickens have come out to play

You think Pink has been acting kind of sus, but ho

When you're out with your friends but Mom texts yo

Things are getting spooOOKY! It's Behemoth Hallowe

How it started vs. How it's going