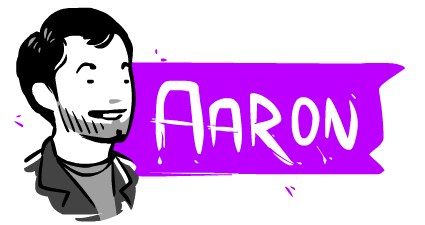 My name is Aaron Jungjohann and I was the lead level designer for BattleBlock Theater. I also have something shameful to admit:

The first time I sat down to play the game, I didn’t know what to make of it.

(The video above was our original trailer before the game was released and contains elements that are no longer in the released version of the game.)

Now, keep in mind we’re talking about a very early build, played solo, with only a handful of blocks and none of the audio/video pizzaz that would come later. I knew that I loved the art direction and the platforming felt spot on, but I just couldn’t figure out what sort of platformer it was supposed to be. One moment I’m ricocheting off the walls, the next I’m turning triggers on and off in a teleporter maze or trying to counter cats with some surprisingly deep rock-paper-scissors style kung-fu. It was a lot to take in. 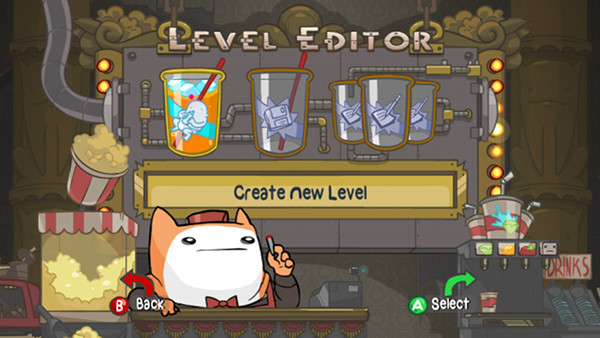 When they showed me the level editor I had my answer: BattleBlock Theater is just about any type of platformer you could want it to be. “Oh…” I said, and, “OHHH…” I said. After a few minutes of mixing this block with that block to trigger THOSE blocks, I was hooked.

Yet, even then I’d underestimated how much depth was contained within Battleblock Theater’s deceptively simple mechanics; 3 years and hundreds of levels later, I am STILL being surprised by what my team and the player community are capable of building out of only a couple dozen block types.

And while all of this potential is “A Very Good Thing”, I learned that the game’s depth could quickly transform itself into frustrating complexity unless we were very careful about how we exposed players to the game’s many “block mechanics”.

So, getting down to business, I’m going to break down a couple of the ways we used level design to help players teach themselves about BattleBlock Theater’s many perils and possibilities.

Blocking it all Out

Right out the gate, one of the first things I did when attempting to plan out the 8 Chapters of Story Mode was separate all of the game’s block mechanics into 3 groups, in order of complexity:

To learn how the first group operates, players simply needed to touch them. That said, one of our favorite Blocks in this group, the Lava Block, is also one of the deadliest looking. And while I suppose giving the Lava Block a safer, bouncier make-over was always an option, where’s the fun in that? Instead, to help players along, I designed a portion of the first level of Chapter 1 so that it would hopefully trick players into their very first bounce. Luckily for me, it was also a perfect opportunity to teach 2 other Blocks in the group: the Explosive Block and the Cloud Block. 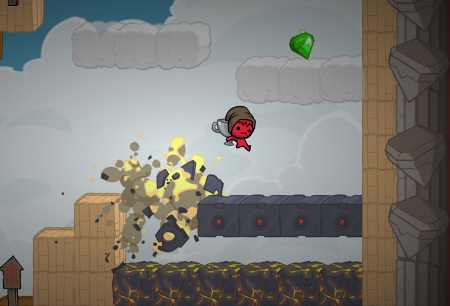 Featured blocks in this screenshot are the clouds, explosive blocks and lava blocks.

Seeing the Gem, most players run out and make a jump for it. Having never seen an Explosive Block before, they usually have no idea that its about to disappear out from under them. A few moments later and they’ve fallen down onto the Lava Blocks before bouncing up through the Cloud Blocks, panicky, but wiser. 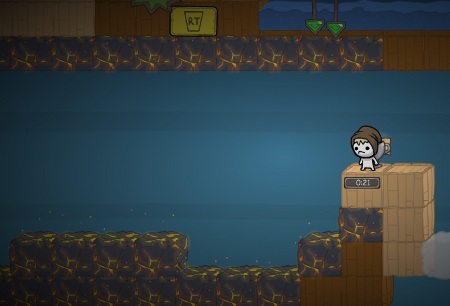 Forced to jump onto lava blocks. How cruel!

Still, in order for all of that info to really stick we made sure to include similar “lessons” at least twice more, which is why you see this impossible to bypass room of Lava Blocks in 1-3. And besides, who doesn’t like bounce houses?

The second group of Blocks are a bit trickier, as they force the player to actively manipulate them. The first Moveable Block is found in Chapter 2, and is one of the few instances where we rely on an on-screen indicator. Because it is very important that players understand the ways the Moveable Block can be manipulated, we first force you to push it, and then later pull it to make progress. 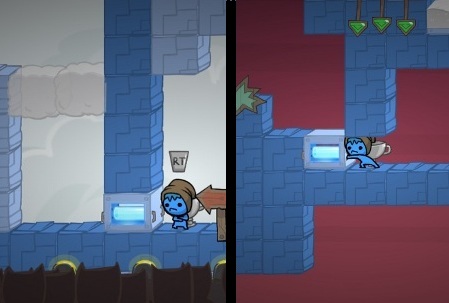 A bit trickier was conveying the Moveable Block’s ability to hang in the air; many players were still confused even after the appearance of the block had been revised to make it appear hollow. We tried placing a few Moveable Blocks floating in the air here and there, but in the end players really just needed to place it there themselves. 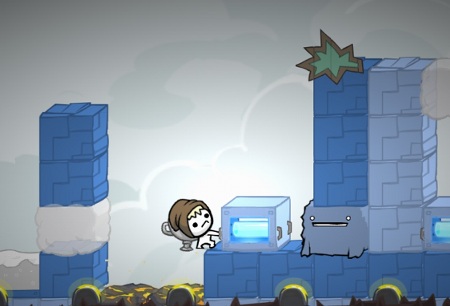 To help nudge players along, this sequence was added, requiring players to get the Moveable Block out of the Ferdinand’s path (that would be our fuzzy friend with the smile). Players must jump with the Block to accomplish this, and by including a patch of Lava Blocks behind them, we found that players were even more likely to bounce up and drop the Moveable Block while in the air. 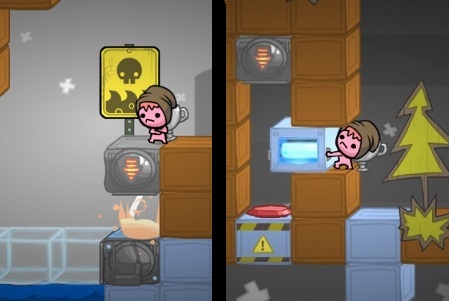 Finally, there was the last -and potentially most frustrating- group: the “automated” block mechanics. Because these required players to react to THEIR timing rather than let players set their own pace, it could be especially frustrating for those who didn’t understand how they worked. With this in mind, Chapter 5 opens with a safe spot that allows players to observe a Laser Block firing directly at a Bridge Block, and this bit of automation is reinforced a bit later by forcing players to recreate a similar interaction themselves.

As we’d learned with the Moveable block, by creating this chain reaction themselves, players were better prepared to quickly anticipate the role these blocks could play in hazardous or puzzling situations later on. And speaking of hazardous situations…

Welcome to the Danger Zones

Another way I tried to smooth out the learning curve was to limit which areas of the level were dangerous to the player. In Chapter 1, the primary threat early on is Water Blocks, an unmoving threat that is only on the floor; players have to be careful about what’s below them, but the area ahead and above is hazard free (if not Cat-free). 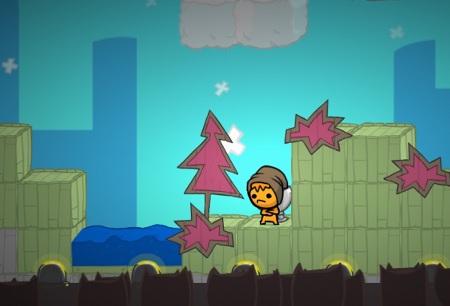 Near the end of the Chapter 1, players encounter their very first Laser Block. Placed vertically, the Lasers help players feel especially motivated about considering a larger part of the area in front of them. 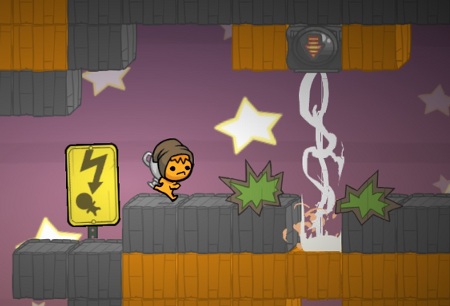 Running from danger can be a motivation in life, or at least in BBT.

In Chapter 2, players begin to notice that Spike Blocks are now popping out here and there along the walls and ceilings, adding a new dimension to their troubles. 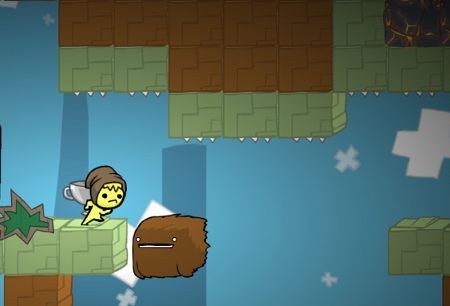 Look out for those spiky things, what do they call ’em? Oh yeah, spikes.

And finally, this difficulty curve steepens in Chapter 3 to include hazards with more complex and unpredictable patterns like the Cannon and the Rocket Bot, forcing players to adapt to threats from all angles, albeit first with Wings at their disposal and then eventually without any help at all in Chapters 5 & 6. 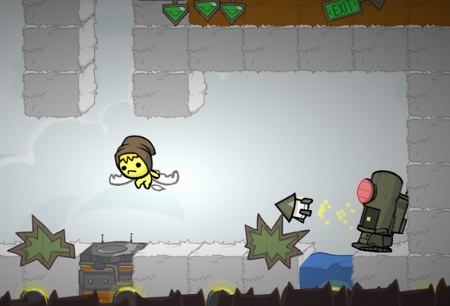 Rocket Bots that target you are one of the deadliest hazards in the levels.

And there you have it: some behind the curtain bits about progression in BattleBlock Theater’s Story mode. Of course, planning and good intentions can only go so far, and it was only through an amazingly helpful army of playtesters (both internally and at tradeshows) that we were able to sand off some of the REALLY sharp corners. Thanks to all of you who were drowned, impaled, exploded, electrocuted, eaten, melted and shredded: we couldn’t have done it without you.

We heard it was #PenguinAwarenessDay, so here are

Castles are being crashed here at @winter_gamefest

Catch us this weekend at Winter GameFest on the UC

Happy New Year from our flock to yours! 🎉 Thank

Castle Crashers is a part of the Best of Indies 20

Wishing you Happy Holidays from all of us at The B