Well, Dan and I were going to go get some exercise, but Kelly let us know that the 300,000th person was about to post to the leaderboards, so we figured it would be better to knock out a quick update instead.

The title update is going well- we spent the weekend testing and testing and testing to see if the fixes work and it is looking pretty good. With any luck tomorrow we will be doing a big multiplayer test with everyone in Redmond. If everything goes well we’ll be moving from the “fixing it” stage to the “verifying” stage. After everything is fixed and verified by everyone and their mother, we’ll roll into the certification stage. If we pass that then we wait for the TU (title update) to be released. With all these moving parts, we are unable to tell you all with precision when the TU will be out, but we are working on it every day. 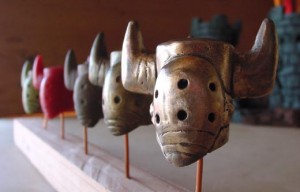 In the meantime, since I’m not a programmer, I get to do all the other stuff, like unloading the PAX delivery van and putting the trophies back on schedule (yes, AH HD trophy update tomorrow I PROMISE DAN!!!) Here’s a shot of some cool things we took to PAX but never made it out of my suitcase. I had cast 18 bronze helmet keychains before we left, (both Knight and Barbarian), and we’ve been trying to figure out what to do with them. They are very cool and very heavy. The far left is the head of the original figurine, the next is the wax casting, then the first bronze pour. The next one is the first polish and the final one on the right is the final polish.

We are going to keep an eye out for some of the coolest Castle Crasher videos on YouTube and on Friday we are going to give away the first of these keychains. I’m sure we’ll figure out rules and such tomorrow, so check back and in the meantime, post your videos…I mean, can anyone beat these?

PS, for those of you who were lucky enough to place an order on our webstore before we sold out, were waiting for our custom boxes to be fabricated before we ship them out. If everything goes as planned, we’ll be shipping this week. Check back later in the week for an update.