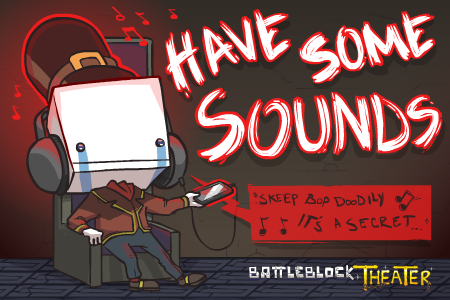 There are some wonderful sounds in BattleBlock Theater (BBT) and we’d like you to have some! We’re currently working on an official sound track for the game, but those plans are still solidifying. So to satisfy your ears until then, we’ve put together a pack of BattleBlock Theater sound effects, Will Stamper (narrator) quips from the game and BattleBlock Theater songs as ringtones in two formats: MP3 & M4r.

Just so you know what you’re getting yourself into, here are a few things that come in the pack:

“Just run like you have diarrhea and it’s starting to come out… a little bit”
“Everything’s coming together like butt cheeks”
“Get the best time and I’ll give you a kiss because I love you!”
“It’s kind of like soccer except it’s more like basketball & noghting like soccer.”
“What the f-…art”
“mmmmmHMMMMMM”

Get the full Ringtone pack HERE on the new BBT audio page!

If you’d like to brainstorm ideas for the next BBT Ringtone Pack, sign up for our Forums and add your ideas to THIS THREAD. We started off by asking our forum users and then took their favorite quips on to the BattleBlock Theater Facebook page as a poll for everyone. Then we threw in a few of our own favorites! We enjoy working together with our fans to bring you more of what you love!

1.4 years of playtime in one weekend 🤯…thanks

While we are at it, we figured why not do ANOTHER

It's Autumn...the air is chilling, leaves are fall