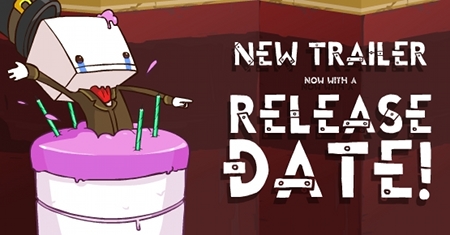 Being able to announce a release date for a game is something we don’t really do that often. Which is why today is exciting for us, and hopefully for you.  Having just been recently announced as a Spring 2013 release, today we are happy to share with you some even more exciting BattleBlock Theater news.

Now feast your eyes on the video below:

On April 3rd, 2013, BattleBlock Theater will be available worldwide on Xbox LIVE. For 1200 Microsoft Points, or approximately $15 USD, you will be able to experience technologically evil cats, friendship, betrayal, co-optional justice, and several other forms of visual and audible stimulation.

It’s so close we can taste it, which doesn’t really make sense since we don’t use taste as a measure of how close something is, but I think you get the point, right? RELEASE DATE, YES!

ICYMI: It's that time! We’re currently in the Ni

A lovely Hatty portrait from our Discord community

13 years ago a game baby was born. Today that game