The BattleBlock Theater Closed Beta will be here sooner than we think. We’re still locking down all the details, including the beta testing dates, but we do have an exciting update to share! In addition to story levels and the level editor, we’ll be giving Beta Testers access to all the arena modes!

The Beta will include a few levels of each arena mode, which have yet to be fully revealed…until now. 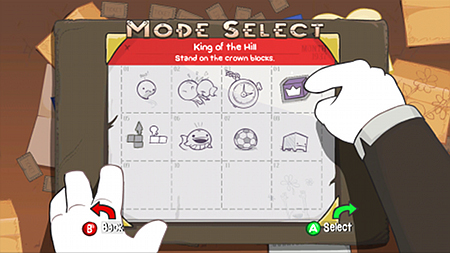 We present to you the eight arena modes of BattleBlock Theater. Players will have their choice of Co-Op or Versus in any of these arenas and they can enter any of the following:

Steal enemy souls and run away. Stomp, punch, kick or kill your opponent to capture their soul. The longer you have their sweet, sweet spirit, the more points you or your team will get. Don’t forget that you’ve got a soul too, so you better make sure that doesn’t get stolen in the process!

Beat and kill the enemy team. It’s that simple. 1, 2, and land those punches. Give them a good uppercut. Use those weapons you earned. Get points for being the most powerful team.

Score the best time. How fast can you go through a level? Or a better question would be: How much faster can you go than others? Prove to everyone that you’re the best of the best at finishing before anyone else… In this context it’s a good thing!

King of the Hill

Stand on the crown blocks. They’re golden and shiny. You can’t miss them. The only problem is your enemies can’t miss them either! Keep your opponents off those blocks and do your best to stay on them for a multitude of points.

Color more blocks than the other team. You’ll start off with a “blank slate” of greyish blocks and end with a kaleidoscope of colors–unless you’re really good or really suck, then you’ll only see giant blocks of color.

Grab more gold than the other team. A floating whale spits out gold. Your objective is to take those pieces to the safe. It’s that easy. Just remember to keep them safe from your opponents!

Get the ball in the basket. When you play this mode, you’ll be grabbing, passing and dunking in no time! Just remember to put the ball into your opponent’s hoop and not your own!

Ride the horse to the stables. You’ll have a chance to use your sneaky skills to steal the other team’s horse. Lead the horse all the way back to your own stable to get your haul of points.

Please keep in mind that the names are a work in progress. It could be a whole new set of names when the game releases! Or not…