A long time ago, we made a game called Alien Hominid. It was based on the Newgrounds.com web game of the same name by Dan Paladin and Tom Fulp, and it led the creation of the Behemoth.

Well, just the other day, the original version of Alien Hominid passed a big milestone on Newgrounds – the game has now exceeded 20 million plays! 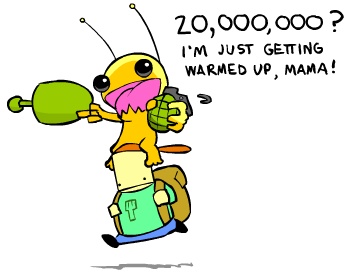 After being released on Newgrounds, the Behemoth was eventually formed and Alien Hominid was developed for the Nintendo GameCube and Sony PlayStation 2. Now the full HD version is available on Xbox LIVE.

Our lovable, little, yellow alien invader pal sure has come a long way since that little Flash version of the game. 20 million plays? That’s a LOT of chomped heads. Yeah… we’re really proud of him.

Anyway, we just wanted to take a moment to thank all of you who’ve supported us by playing the game, sharing it with your friends, and even wearing our Alien Hominid antennae at the San Diego Comic-Con with pride! 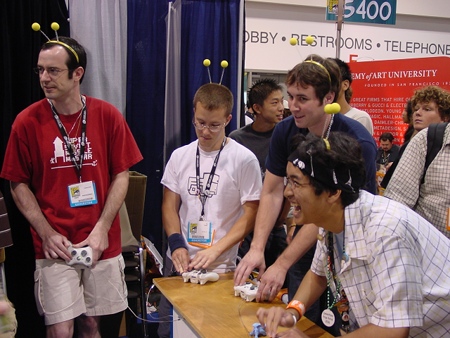 In other news, our fan fiction writing contest finalists have been selected and you can vote for your favorite story. The top five will be the lucky winners of a BattleBlock Theater t-shirt or Castle Crashers on XBLA or PSN America. YOU choose those five. Winners will be announced next Tuesday, May 15th.

Until then, try playing the original Alien Hominid to relive some of those chomptacular memories!