Well wipe those tears from your cheeks because…….

How we’ve longed to deliver this game in its new vessel. We know you’ve had that kind of longing too. Here’s some great quotes:

geo_player, from Twitter: “Yo quisiera el Castle crashers en steam pero seguro no ;_;”
Tiago, from Facebook: “pls release castle crashers to pc PPLLLLLLLLS!”
Anonymous: I hate you guys, when is battleblock coming out????????

Before we get into the details of the game, Dan has written a Poem for this occasion, enjoy: 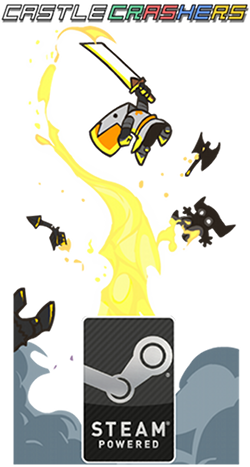 A Poem by Dan Paladin:

While BattleBlock has been churning, there’s another wheel turning! And that wheel is Castle Crashers running on Steam!

It was accomplished by utilizing one of our programming teams! We always liked this platform so it’s kind of a dream!

I’d say a release date but the future’s unknown. If I make a mistake I shall never atone.

If you’re in Germany this weekend please say hi to John.  He is presenting our Steam game at Gamescom.  If you’re extra nice maybe a hands on!

We were invited by Valve to show Castle Crashers running on Steam at Gamescom. This is our first time at the event, and we’re sending our very own John Baez to the show all by himself!   Stop by and check it out at Hall 7.1, booth: C030 (Friday-Sunday, August 17-19).

Finally, we’re going to our last summer trade show: PAX (Penny-Arcade Expo) on August 31st – September 2nd in Seattle, Washington. Come by  The Behemoth Booth #3003  to check out both Castle Crashers for Steam and BattleBlock Theater. You’ll get a taste of the games, and more importantly a taste of freedom, FREEDOM!!!!!!!!