Thanks everypeeples for coming to our little birthday party the other day! Boy was it a lot of fun. So many people crashed the party that at one point our servers exploded and we almost ran out of cake, but then these guys brought some by, and everything was perfect! 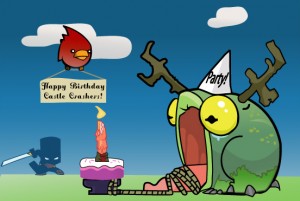 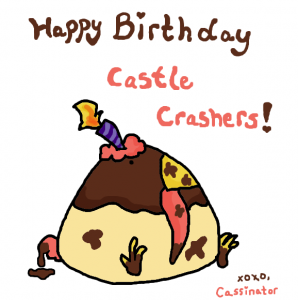 We had a bunch of party games, and gave away lots of party favors (with more still to come). Hit the jump for more Party Wrap Up Madness including the winner of the Party Hat contest for the Pink Knight, and the Top reasons to regift free Castle Crashers.

In “Do you like my party hat? Yes, i like your party hat” we challenged folks to create a fabulous party hat to wear to our Birthday Party.  We received dozens of spectacularly festive submissions who will receive actual Behemoth hats! Click here to see all the madly festive hatters! Our very favorite party hat wins an uberspecial-superrare Pink Knight figurine as well! And the winner is….. 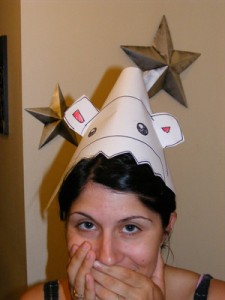 “I wanted to go to the Behemoth party, but a BiPolar Bear kept attacking me!”

What’s particularly amazing is that she sent this in within minutes of the begining of the contest! Its like she was already wearing this hat.. and just waiting for it to begin. Maybe Bipolar bear gives her psychic powers? Either way, well done Meghan, we like your party hat!

Over on The Behemoth Community Forums we had a little get together we called  “Fashionably Late to the Party. ” Here we were going to give away 100 free full game codes for Castle Crashers for people who have yet to have a chance to play, or for those who wanted to share the carnage  with friends, all you had to do was ask! Well, you guys had some pretty compelling requests so we ended up giving out well over 500 codes. We asked folks to tell us why they wanted a free code, and the responses were, well, as entertaining as they were varied.

here are some of my favorites:

I don’t have any friends but i’d love to imagine i can give a code to someone. Please The Behemoth, pimp my life.

Dear The Behemoth Games,
I am a pathetic graduate student in history at a midwestern university. I have no money. Choosing a career in history, I will never have any money. What little money I could cobble together was thrown at an XBox in the hopes of playing quality off-brand edutainment titles like Where in the World Is Carmen San Jose?, Math Bluster, and The Mostly Nebraska Trail. However, I have heard tell from my brothers-in-law that I could learn much from your medieval village simulator Castle Crashers. Being a poor, humble, (and hopefully eternally grateful) graduate student, I cannot offer much of a bribe, other than dropping subtle hints in my lectures that your games are top notch, and your staff are snappy dressers and passionate lovers. I will also mail you the contents of my sole posession, a bag of marshmallows (if it be your will).

Our 10 year old son was depressed because the girl he liked at school would not return his phone calls. School got out, summer began, and we bought him Halo 3 and he’s now ALMOST forgotten all about her. Now all he does is play Halo. Our friends have Castle Crashers, play it almost every day, and talk about it constantly. If we could add Castle Crashers to our collection, he would have a second game to play and not JUST HALO ALL DAY EVERY DAY. And perhaps it would erase the last remembrances of a love scorned from our awesome 5th grader.

Right, I’ve got an silly friend who won’t buy CC until it’s 800 points, despite my constant encouragement. Since this will obviously never happen I would like a code to deliver to him. I shall write it on my hand when I slap him in the face.

My very scientific study shows conclusively that these are the top reasons to gift Castle Crashers:

A friend who has recently lost jobs and/or girlfriends
A Friend that wont stop coming over to your house to play Castle Crashers
Friends or family who have moved away who you would like to keep crushing barbarian hordes with
For a friend who is too “financially challenged” to buy the game for themselves
To bribe someone into being your friend
To cure someone of their Halo or WOW addiction
Saving marriages
and of course for use as Birthday Presents!

one final thing of note, regarding the “Party Favors” of the Necromantic Pack. We’re still going to be giving away piles of these on Twitter and on Facebook, just as soon as we get them! (soon? soon.)

Thanks again for coming to the party! You have some cake on your shoe.

ps. Dan’s B-day is on Monday! Don’t forget to send him presents!