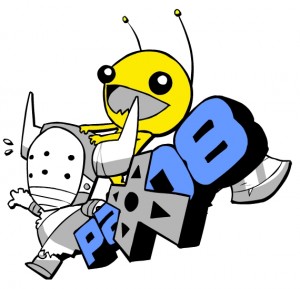 Our Journey into the heart of Seattle to tackle the beast known as PAX 2008. A collection of pictures that loosely walks you through our trip to Seattle for the annual Penny-Arcade Expo! Read on to see all three days as documented by our very own “crappy cam version 2”.

This year PAX was more hectic than we ever imagined. With Castle Crashers releasing just two days before the show starting we somehow managed to not only show up with all of our junk, but have a very amazing turn out at the booth as well. We had a line formed from Friday to about Sunday morning until we finally sold out of most of our merchandise. Thank you for everyone that came out to show their support!

I always like to start things off with letting you know who showed up for this trip, so here’s the list:

April Fulp – Tom’s wife and the only female presence for The Behemoth at PAX (unless you count Dan, OHHHHH!)

Billie Martin – Tradeshow Coordinator (not really his title but it sounds pretty official) Billie does it all when it comes to any show that we do.

John will usually fly out a day before everyone to take care of all our last minute shopping needs. This includes trips to two of our very favorite stores, Ikea and Home Depot. If you work for either of these organization please feel free to send donations to us, thanks.  We buy our display shelves that we use at conventions from any local Ikea store in the area and then we donate them to anyone who wants them at the end of the show. It’s sort of like recycling but in fact we’re just wasting resources, so maybe it’s like the opposite of recycling, planet killing? OK drifted off topic.

So it’s pretty surprising how much stuff we have to ship over just to run a booth at PAX. John and I spent at least a month just trying to grasp how much we were going to need to ship over, I still don’t know if we forgot something. Here’s the U-Haul truck before and after, all of which was loaded by John. For being everyones boss he sure does do a majority of the heavy lifting, weird.

Dan and I show up on Thursday and we head straight to the convention center. John is still packing up our truck and while we wait for him to make his journey from the marshalling yard to the actual show Dan and I sit around and talk to Violet, aka Veronica, Vivica, Vivian, “V”, etc from our awesome booth neighbors Pink Godzilla. Which incidentally decided to cover our booth with pink toilet paper one of the nights. More about this later.

Thanks to the awesome help of the PAX Enforcers we unloaded our truck in record time!

So how many cardboard boxes does it take to run a booth at PAX you ask? Way too many. Just look at poor Dan trying to not get run over by the forklifts. Just don’t hurt your left arm Dan that’s all we care about!!!!!!!

More pictures from our booth very very very slowly taking some type of presentable shape. In fact we didn’t finish setting up until the doors opened on Friday. We’re generally pretty organized when it comes to trade shows, in fact we’re pretty organized with anything we do. But when it comes to PAX we just like to sort of show up and design the booth on the day of.  You can also see a tower of pink growing in the background.

This was pretty much how crowded our booth was for the entire show! Of course it did help when Billie would stand on a chair and scream “Free Behemoth Stuff”.  Actually both of these pictures are from the previously mentioned free stuff screaming event we decided to do. At one point everyone was chanting “Castle Crashers” which doesn’t roll off the tongue as nice as you’d like but still has a very nice chant to it. If only our game was called CheezIt! (You can chant Cheezit better than Castle Crashers is what I’m trying to say)

At the end of the first night of the show the always generous organizers of the Penny-Arcade Expo throw a well needed reception for all of the exhibitors. Filled with free food and booze it’s just about the best thing you can offer any person after a long day of lifting boxes and selling merchandise. No pictures from the actual reception though as my attention span for remembering to take pictures at these events is slowly deteriorating. Just pretend it was cool and we had some funny moments or something.

On the Saturday of the show was it was just non stop hectic action. People just kept coming to the booth to buy stuff, play the game, and just say hello. I guess it helps when your game comes out a few days before a show like this, but it was great to meet so many of the people who had purchased the game.

Thanks to Rob for reminding me! I forgot to mention that I was destroyed in a “Wii”mbledon  challenge by the team over at Garage Games. The basic idea was if you could defeat the champ you would win $500 cash money! They approached our booth and asked if anyone would be interested in challenging the master. At this point I immediately started thinking about how amazing I thought I was at the game as I would decimate all of my friends (this means you Howard and James). To make a long story short I was pretty much handed my head on a platter as I was completely demolished in the most embarrasing video game competition of my life (maybe it wasn’t that dramatic, but damn he was good). The good news is I am now in training for an official rematch one of these days, YES!

Later on that night we had made plans to have dinner and bust some karaoke action with the Pink Godzilla (that’s 3 links so far if you’re counting along) crew. Thanks to the wonderful planning by Violet we were off to some type of fantasy where they serve you steak infused with cheese and other slabs of meat that were not only non stop but tasted as if you were riding a unicorn through a valley of something fantastic? Sorry lost my train of thought just thinking about it.

Karaoke was next on our list of activities and John started the night off with his death metal rendition of some song that I forget because I was laughing too hard when he started screaming into the mic. As to preserve my job here I have been asked not to show this video. I have a copy though and maybe one day it can see the light of day.

After unleashing our golden vocal chords and most certainly making our karaoke neighbors shocked at the pure awesomeness of our collective voices we called it a night. We ended things that night with the only way to end things while doing karaoke, Air Supply – All Out of Love. (or it could just as easily have been Journey)

So we had a pretty late night and at least two of us had to be in at the booth early Sunday morning to get things setup for the last day. Billie went ahead of me as I woke up late and this was what he walked into:

So apparently while we were out with the PG crew they decided it would be a good time to use their special ordered pink toilet paper as decoration for our booth. This was the call I got from Billie as soon as he saw it.

Emil – “On my way, running a little late”

Billie – “You should come to the booth quick, something happened , you just have to see it”

At this point I just assumed that something was stolen or something broke and was in pieces. Fortunately there was the sign attached to all of the TP that clearly stated who was not responsible. There’s video of the whole operation as well located here. (Pink Godzilla Dev Kit Link!) I wanted to leave everything the way it was but some warning about it being a fire hazard was mentioned to me so I just played along.

Basically what this did was open the door to some retaliation for next year. So far the best suggestion we’ve heard is to take all of their merchandise into one pile light it on fire and wait for everything to turn into ash. Then we take the ash and we spread it around where their booth used to be. After which we kidnap approximately 2.5 members of their staff and place them in an abandoned warehouse where they must fight each other to the death in order to escape. Although a little extreme I think we’re headed in possibly the right direction with this.

As the show came to an end we started packing all of our crap back into cardboard boxes again. We took our sweet time with dismantling our booth and had a pretty good time in the process. One of the more entertaining things from that day was watching the removal of the Pink Godzilla Plushie Tower as it almost killed 3 people in the process (video also available for this below). Thanks again for everyone that showed up and said hello, purchased something played the game, walked by and stared at us, etc, etc.

At the end of the show we ended up two stacks of cardboard boxes and very little sleep.

And now some videos!

Two clips in one showing off some crazy crowds forming around our booth.

The fall of the tower of plushies. Camera was running out of space as I started recording too early, so I decided to turn it off until they were ready to drop the whole thing and I sort of missed like 2 seconds, but you’ll get the effect either way.